Arokiyadas’s story is that of courage and will. He overcame serious physical and financial difficulties to rise like a phoenix and work with missionary zeal for his fellow beings.

Born with congenital deformity of limbs, life was not easy for Arokiyadas. He came from a poor family with only his mother to take care of him. He had to drop out of Nungambakkam School before he could complete Class X. Abject poverty, and then a government eviction notice for his house in the slum clearance board for not paying taxes, caused him depression. He ran from pillar to post when a friend took him to a NGO. Usha directed him to C.J. Paul who gave Arokiyadas two letters – one for Narayanan at Ecomwel and the second one for Padmini Subramaniam who coordinated an NGO for women.

“It was from Ecomwel that I got financial help. A loan with zero interest helped me clear the government debt. I had to repay the loan. But how could I? Nobody was willing to give me a job as I was disabled,” says Arokiyadas. “Finally, with the help of my friend Umapathy who was also physically challenged, I got a job in an electrical shop. Both of us needed the job. So we decided that one week I would work while the next week he would. Everyone was given ten rupees a day but I was paid only eight rupees. I had to check all the electrical goods taken out by other electricians and also deal with customers. Being a fast learner, I learnt all the electrical work in a short time and became an expert electrician. But when increment was given, I got only Rs 2.50 whereas others got Rs 5. I was disappointed but did not give up. I had to prove that I was better or at least equal to others and so I worked hard. The next year when everyone got Rs 5 as increment I got Rs 7.

“Everyone at Ecomwel encouraged me but I will be always grateful to Mr Narayanan, Mr C.J. Paul and Mr Mani for not only inspiring me but also giving me moral support and helping me in every way possible”.

Due to a misunderstanding with his co-workers, Arokiyadas left his job at the electrical shop and worked with CAN (Community Action Network) for their AIDS awareness programme.

“I used to commute on my tricycle to most parts of the city, distributing pamphlets and condoms to auto rickshaw drivers and others. For this, I was paid a monthly salary of Rs 1000. I repaid the loan that was offered by Ecomwel from this income. When the CAN project ended, I worked for Ecomwel’s project located at Cauvery pakkam Village, Thiruvallur District. This was a rural development project and I used to stitch plastic bags. Later, I was given the responsibility of opening the Ecomwel office in the morning and closing it in the evening. Besides this, I offered to run errands for the staff like paying the electricity bill, attending to bank work.

When Reena Perolin, the funding donor from Switzerland, visited the office, she was impressed with my enthusiasm and hard work and appointed me a full-time office assistant for Ecomwel on a monthly salary of Rs. 800. The next year, the salary was increased to almost double – I was paid Rs.1500.

Many people used to come to office enquiring for me as I used to guide them on how to access government services. When Mr. Mani, founder of Ecomwel, realized that I had helped nearly 500 persons with disabilities, he published a booklet highlighting my story and named me ‘One- man army’. This inspired me the most and I continued my work with great zeal. Ecomwel further encouraged me to undergo a training program at CSIM (Centre for Social Initiative and Management).

After the one year training programme, I was asked to start my own NGO. But, I was diffident and did not want to leave Ecomwel. Later, with the full support of Ecomwel, I launched my NGO ‘Snegithan’ in 2003 and Mr. P.N. Devarajan, founder of CSIM inaugurated my small office.

Till date, I have provided referral services to over 3000 people. I not only guide and support physically challenged persons but also offer support to under-privileged children. There was a time when I did not have money to have one meal a day, but today I have 75 kg of rice in my office for donation. Most of these trust funds are sourced from individuals”.

There’s a sense of pride and happiness as Arokiyadas sits in his small office. On one side of the room, there are cupboards where he stores his files. Part of the room is filled with the computer and accessories. The room has a sliding glass door and it is from this small space that big deeds are carried out. The major focus of Snegithan is offering counselling services to the differently abled and providing them with aids and appliances, educational and medical support, employment referrals and coordinating self-employment projects.

Arokiyadas plans to develop Snegithan as a leading counseling centre. He coordinates an annual tour to Velankanni and other places of worship for the children who are supported by his organisation. The funds for this are mobilised from individual donations and through sponsorship.

Arokiyadas lives with his wife and twin daughters. “My children are very affectionate towards me and so is my wife. I am a very happy person now. I have a bank account and obtain a stipend from Ecomwel.There is no one willing to offer support to my organisation to meet the administrative expenses. I would be happy if people after reading this article, come forward to support Snegithan”, says Arokiyadas.

If people are motivated, they can help others. After meeting Arokiyadas, I feel sure that the word ‘impossible’ does not exist; man can overcome any difficulty if he has a will. 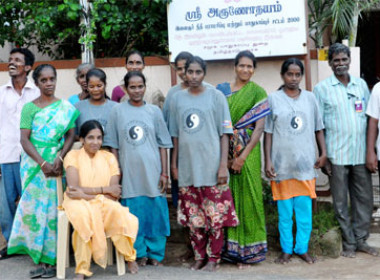 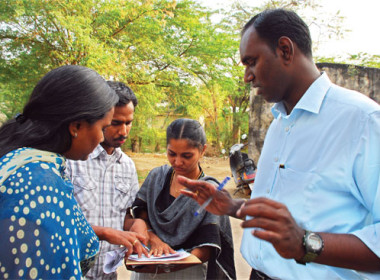 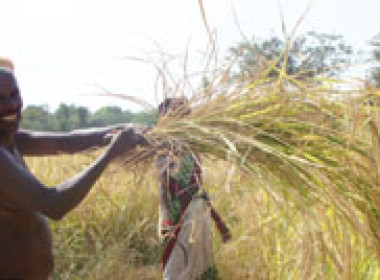 Let us know your thoughts on this.